In Some Experiences of an Irish R.M., one of Mrs. Knox’s horses has gone missing and Major Yeates observes that her grandson, Flurry Knox. “…was not – to put it mildly – shrinking from that economy of truth that the situation required.” The President’s National Commission on Fiscal Responsibility and Reform is calling for a major tax overhaul in its delightfully titled report The Moment of Truth. The Commission is certainly not shrinking from its responsibilities.

The report proposes what is likely to be a massive tax cut for the very wealthy and a tax increase for the rest of us. Ideally, the Commission would like to see the highest individual tax rate set at 23%. It is currently 35%. The 35% rate applies to taxable incomes over $373,651. So, if your taxable income is $410,000, you would save $49,200 a year in income tax under the Commission’s proposals. Remember that prior to the Tax Reform Act of 1986 and the Reagan tax cuts, which were meant to simplify the tax code, the top individual tax rate was 50%.

When Irish Eyes are Smiling

In the eye of its economic storm, Ireland is stubbornly refusing to raise its corporate tax rate which sits unyieldingly at 12.5%, and has instead chosen to inflict economic pain on everyone else – with the exception of senior debt holders in Irish banks, who are being bailed out by taxpayers in the European Union. In solidarity with Ireland, our National Committee on Fiscal Responsibility and Reform (what George Orwell would have called the “Truth Commission”) would like to see the corporate income tax rate as low as 23%. The maximum corporate rate is currently 39%.

Meanwhile, the Commission is proposing that all itemized deductions for individuals be eliminated… More later once I have a chance to read through the report in detail. 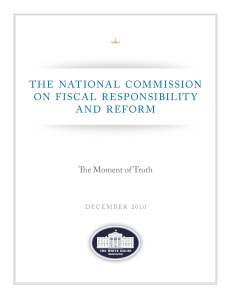