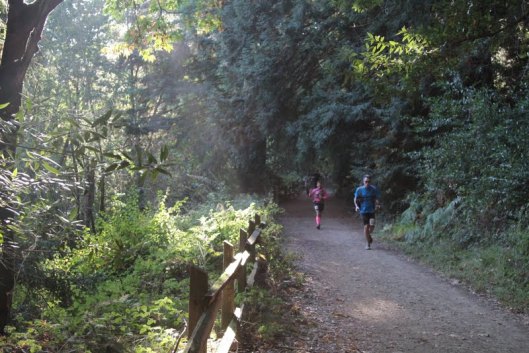 Somewhere along the Bridle Trail close to the half marathon mark. Photo courtesy of Pete Beck Photography.

“You should hate your pacer.”

Diane Forrest was explaining her philosophy, or art, of pacing as we were running somewhere along the last portion of the Dick Collins Fire Trails 50 mile run. She was telling me how she had unleashed a torrent of foul language at her pacer during the later stages of the Western States 100, when from behind us came a kind of proclamation.

There was to be no argument with this defiant announcement. Although not a literal statement of fact, the emphatic challenge of this remark was – “I am going to walk for awhile. See if you can make me do otherwise.”

Diane was pacing Jennifer Blake over the last thirteen miles of the course, and Jennifer had clearly reached a moment when she needed to stop, dig deep, and summon her reserves. But the pacer is relentless. It’s the job.

Then my watch made a chirping sound.

“What’s that for?” – came Diane’s query, her ears missing nothing.

“That’s to remind me to eat,” was my response, although I made no effort to do anything of the kind.

“What have you been taking?” Diane inquired very reasonably.

“Usually a Gu… (awkward pause) …I suppose I ought to have one.”

You see, a pacer also thinks for you. After a time, there is no blood flowing to your brain, since your muscles are not very good at sharing. They tend to use every drop of it, leaving nothing for non-vital functions such as thought and digestion, which is a pity, because all that food you’ve been ingesting has not been digesting. Think of an air traffic controller with planes stacked up for miles attempting to land in foggy weather and you’ll have a sense of the resulting stomach nausea.

“What have you been taking for electrolytes?”

“You need more than that.” Digging into her pack, she handed me a few S! Caps.

“Let’s run to the next uphill!” And so it goes…

Perhaps most importantly, the pacer looks after you. It is a selfless act that is paradoxically usually not appreciated until well after the finish. But I was secretly elated to be running with Diane and Jennifer. They graciously let me tag along for the last six miles. To minimize the level abuse hurled (that word again!) in my direction, I resolved to wait until after we finished to tell Diane that I was having a good time. And, at the risk of revealing something that could be used against me during some future run, the truth is that pacers are Angels.

The day in the Bay Area was angelic as well – clear skies and moderate temperatures with beautiful views of San Francisco from the ridge line – what pilots might call “ceiling and unlimited visibility.” The Fire Trails course is an “out and back” run that winds through several East Bay regional parks. Over 50 miles the vertical ascent is 7,800 feet. Since you finish where you started, the descent is also 7,800 feet.

The most daunting hill in my mind occurs after leaving the Steam Trains aid station. Here, you begin a 1,500 foot descent to the turnaround four miles later at Tilden Park. This didn’t seem too bad on paper. But the thought rolling around my head as I carefully wound towards sea level was – I am going to have to come back up this hill. But another truth about ultra running is that most people power-walk the up hills. Perseverance and patience are the necessary skills.

The three of us persevered and finished after dark with our headlamps lighting the way. My official time was 12 hours 39 minutes – a rather nice day spent on the trail.

I would like to thank my wife who, since her leg was in cast (something to do with rescuing a cat from Kauai), was with me in spirit during the run, and my parents who let me park my weary body for the night in Vacaville.

Many thanks go to all the volunteers who are also Angels. At Sibley, I asked for two cups of coke and a wondrous volunteer handed me the bottle to finish. And thanks to Chuck Wilson, heir to the Dick Collins legacy, who volunteered at Steam Trains and filled my water bottle both times.

Lastly, to that efficacious pacer, Diane Forrest, you kept me going, and I am thankful. By the way, I also had a good time!

Ultra running makes me a better person in that I become more compassionate, thankful and understanding. At the beginning of each run, I have faith that the sun will set at the end of the day, and at that moment, I will find that I have finished the race. 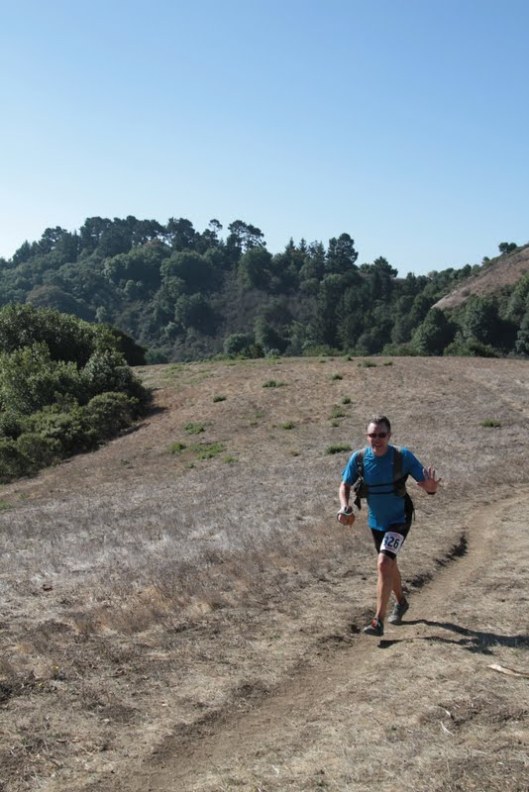 Looking a bit stiff on a slight uphill just after Fish Ranch Road and about 20 miles. Photo courtesy of Pete Beck Photography.