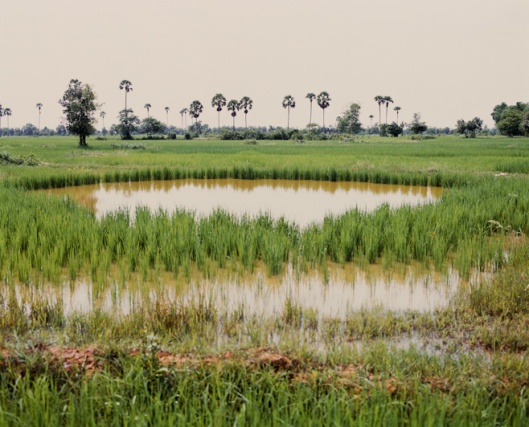 One of the exhibits we viewed at the Asia Society Museum while in New York was Vandy Rattana’s Bomb Ponds.

Between 1965 and 1973, the United States conducted illegal bombings of Cambodia and Laos, countries with which we were not at war. The bombings, eventually code named “Operation Menu,” began under President Johnson and escalated under President Nixon and Secretary of State Kissinger. The full extent of the bombings was not known until the year 2000, when the official documents were declassified.

Some forty years on, the bombings are still painfully remembered in Cambodia. It is hard to erase the memory of 110,000 tons of bombs carpeting the landscape. Many of the bomb craters still exist and become filled with water during the rains – hence the name “bomb ponds.”

The modern equivalent of the U.S. bombings of Indochina can be found in President Obama’s use of drones, which are used to bomb countries with which we are not at war. Despite how drones are sanitized for the U.S. public as some sort of video game, if the act of bombing foreign countries we are not at war with was illegal in 1970, it must still be illegal today. After all, it makes no difference whether the bomb that kills you is dropped from a B-52 or a drone. Or do, in fact, the ends justify the means? That is dangerous logic.

What will the “bomb ponds” in the Middle East look like in 2050, and how will the United States, President Obama and Secretary of State Clinton be remembered in this region forty years from now?

From the Season of Cambodia:

A poignant series of photographs and a one-channel video by Vandy Rattana exploring the U.S. bombing of Cambodia during the Vietnam War. The serenity of Vandy’s images belies the violent history of the landscape, while his video highlights the resilience of the Cambodian people. Bomb Ponds also brings attention to the lack of documentation of these unwarranted acts of violence undertaken by U.S. government.