When people talked about how Richard Nixon disgraced the office of the presidency, little did they know that this was the start of a forty-year slide in the degradation of that office to no more than a televised reality show. After what now appears to be the certainty of a Trump nomination, that process is complete.

Imagine if you will (cue Rod Serling), a political party so detached from the mood of the Country, that it would rather commit suicide than continue with the lingering malaise and lugubrious drollery that has characterized American politics.

As the rest of the world watches aghast, the United States has now entered…The Twilight Zone. 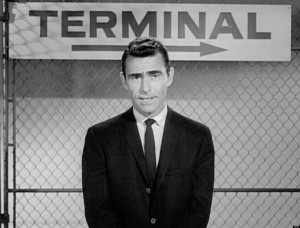 1 thought on “Keeping up with the Trumps”