[another from the Antarctic course series]

Three days in an Antarctic blizzard on Mount Erebus with just a sleeping bag was good training for what would follow later in his life. Sir Raymond Edward Priestley was an expedition geologist with both Shackleton and Scott in the Antarctic – first with the Boss on the Nimrod expedition from 1907-1909, and then with Scott on the Terra Nova expedition from 1910-1913. 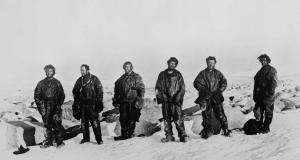 The Northern Party after their long winter in the ice cave From left: Dickason, Campbell, Abbott, Priestley, Levick and Browning.

Although not particularly distinguished academically, Shackleton related that he choose the 20-year old Priestley for Nimrod because “…I can manage that fellow.” That, and Priestley had the correct answer to Shackleton’s question “would you know gold if you saw it?” The Boss always had an eye on the expedition finances. The interview with Shackleton had been arranged by Priestley’s brother. Priestley was in his second year at University College, Bristol, when his brother inquired whether he had an interest in Antarctica. “I’d do anywhere to get out of this damned place.”

There is no great geologic discovery that can be attributed directly to Priestley. From his attitude at Bristol, one would not expect much in the way of original science. Admittedly, he was “…not so hot in school.” And yet…His geology schooling would be in the field among the outcrops, rocks and glaciers of Antarctica. Strictly hands-on lithology. Edgeworth David would be his tutor.

In science, one stands on the shoulders of giants to see a little bit further. Such is the nature of Priestley’s contribution to the science of geology. From an inauspicious beginning, he would add to the geological survey of the Ferrar Glacier and further the understanding of the geology of Southern Victoria Land by publishing a monograph with David (Antarctic Horst of South Victoria Land). During sledging on Mount Erebus, he identified raised beaches and observed eruptions. It was while on Erebus that Priestley survived one of many blizzards, in this case, with just his sleeping bag. The full geological results of the work from the Nimrod expedition would be published with David in The Heart of the Antarctic.

But it was his experience wintering in an ice cave with the Northern Party of Scott’s Terra Nova expedition on Inexpressible Island, in what Vivian Fuchs called “a story of human endurance which has rarely been equaled,” that puts Priestley in the same league as Amundsen, Scott and Shackleton. Cherry-Garrard would add his own wisdom to Priestley’s tale in a summation that is concise and packed with relevance to a twenty-first century audience. “The necessaries of civilization were luxuries to us: and as Priestley found under circumstances to which our life at Hut Point was a Sunday School treat, the luxuries of civilization satisfy only those wants which they themselves create.”

Priestley published an account of the Northen Party’s expedition in Antarctic Adventure: Scott’s Northern Party. At times, his writing is the equal of Scott or Cherry-Garrard:

“I think the coldest thing I ever remember to have seen was the aurora which met our eyes when we tumbled out of our tent that morning to fetch the primus and cooker. It looked absolutely the essence of frigidity, and I know well enough now what I shall mean in the future when I speak of a cold light. A single arch of brilliant greenish-grey, like the curved blade of an immense scimitar flashing in moonlight, stretched across the sky from south to north.” 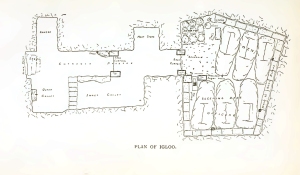 Plan of the Snow Cave – Priestley.

After his dark Antarctic winters, “…the Winter of the world with perishing great darkness” (Wilfred Owen) closed in on Priestley as the lights went out in Europe. Like many men from Shackelton’s Endurance expedition, Priestley served in World War One. He received the Military Cross for his involvement in taking the Riqueval Bridge on the Hindenburg Line (a German defensive position) in Northern France in 1918. On one-day, nearly one-million shells were fired during a twenty-four hour period. To Priestley, it must have seemed like the katabatic winds of Antarctica were shredding his tent once more, and that perhaps he was back on Erebus with just a sleeping bag.

After the war, he helped create the Scott Polar Research Institute in 1920, and followed that with the distinguished academic career he initially abandoned when he made his “Easting down” with Shackleton in 1907.

Priestley meet Roald Amundsen onboard the Fram in January 1911 when Terra Nova sailed into the Bay of Whales. Thus, he speaks with some authority when he compares the three great explorers of the Heroic age in what is perhaps the best analysis ever written, made all the more poignant for its brevity. “For scientific discovery, give me Scott; for speed and efficiency of travel, give me Amundsen; but when you are in a hopeless situation, when you are seeing no way out, get down on your knees and pray for Shackleton.”

Though his science was not necessarily geologic gold, he can most certainly be considered one of the geologic glitterati. 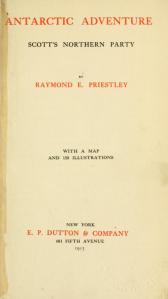 2 thoughts on “All that Glitters is not Gold”