Neko Harbor on the Antarctic Peninsula

It has been said that there is a condition where the ice gets into your blood. Charles Neider talked of it in Edge of the World.

Read even the early explorers of Antarctica, such as Charles Wilkes and James Clark Ross, and you will understand that Antarctica can become an addiction…Even while you’re there the place sometimes seems like a fantastic dream. After you’ve left it you want to return to make sure it really happened to you, in all its grandeur, rarity, purity and beauty.

Scott expressed it somewhat differently when his team made it to the South Pole only to find they had been beaten to the prize by the great Norwegian Roald Amundsen.

Good God this is an awful place.

Apsley Cherry-Garrard, a member of Scott’s Terra Nova expedition, wrote of the return of the Antarctic spring that…

God sent his daylight to scatter the nightmares of the darkness.

And then there was the Australian Douglas Mawson who reflected on his travails.

We dwelt on the fringe of an unspanned continent, where the chill breath of a vast polar wilderness quickening to the rushing might of eternal blizzards, surged to the sea. We had discovered an accursed country. We had found the Home of the Blizzard.

In 1913, Scott lay dying in his tent on the Ross Ice Shelf while Mawson struggled with his own demons on the other side of the continent. Mawson had the misfortune of choosing Cape Denison as the site for his base. This cape is probably the windiest spot at sea level on the planet. During an eight month period, the average monthly wind speed never dropped below 49 mph. One month recorded an average of 60.7 mph. On the day he landed, the skies were relatively calm and “the sun shone gloriously in a blue sky…”

So yes, I have ice in my blood. I have become so afflicted and am enthralled with stories of polar exploration. Antarctica is a place where superlatives are not equal to the task of describing the experience. No language can impart the humbling thrill of seeing the sheer mountains of the Antarctic Peninsula rise five thousand feet out of the ocean – like whales breaching up into the clouds. Or of seeing animals and marine life unafraid of human beings and glaciers draining a continent of ice spilling out onto the water to become sculpted icebergs. And of course, penguins…many, many penguins. 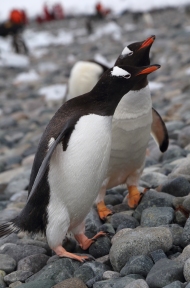 Debbie and I were fortunate enough to travel to the Antarctic Peninsula this past December with OneOcean Expeditions. It was a journey that exceeded our expectations on many levels. There is not much in the world these days about which that can be said. But then Antarctica is probably the closet you can get to leaving the planet without actually doing so.

This mere travelogue is my homage. I shall update it in installments until we end where we begin, in Ushuaia, Argentina, near the southern tip of Tierra Del Fuego.

The port of Ushuaia.

So to borrow from Shakespeare’s apology at the beginning of Henry V (“O for a Muse of fire, that would ascend the brightest heaven of invention…”)

But pardon, and gentles all,
The flat unraised spirits that have dared
On this unworthy scaffold to bring forth
So great an object…

3 thoughts on “The Antarctic Peninsula”