Water as salvation. Water as redemption. Water as…oh hell, somebody just give me some water. After leaving the Peachstone aid station (mile 28), all I could think about for the next ten miles was reaching the river crossing. There, for a few minutes, I would lay in its cool embrace – water running over tired legs, plunging my head below the surface and letting water roll off the back of my neck.

At Rucky Chucky, the traditional Western States river crossing, angelic volunteers refilled hydration packs, offered up a feast at the table and proffered words of encouragement and sunny optimism in the comforting shade of the aid tent. True saviors. The reported 103 degree heat reduced me to a brisk walk, but there were only three miles to the crossing of the Middle Fork of the American River where life would soak back into my body.

So it was more than proper that upon reaching Poverty Bar, it was none other than Himself, Gordy Ainsleigh, who clipped me into the line I would follow to the other side. Gordy gave me a considered look, and selected from among the carabiners hanging on the rope – pausing at one, before choosing another. I had infinite faith in his decision, and as this was my first official river crossing, I gratefully accepted his baptism. 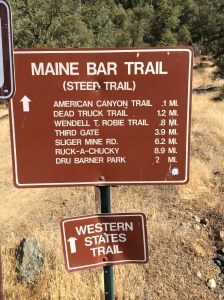 Gordy cast me into the swiftly moving, waist high current and passed me to the next volunteer, thirsty legs now drunk with water. “The river’s getting higher. Be careful, some people cramp up.” There were just twelve miles left in Ann Trason’s inaugural Overlook Endurance Run.

I was doing the middle distance – the fifty-miler. The 100km and 50-mile runners began at 6AM in front of Stone’s Brew in Foresthill just as faint light in the east began to obscure the beautifully clear starry night. “The run starts on this side of the clock,” remarked Ann as she motioned to the time piece informally sitting on the back of a vehicle.

Ann cautioned that the decent to El Dorado Creek would be steep so “…be careful and don’t blow out your quads.” When fourteen time Western States winner Ann Trason says something is steep, you can regard it as a proven, scientific fact.

Back on the Quarry Road and mile 43, four of us were keeping the same pace as we arrived at Brown’s Bar aid station. Our reception was ecstatic, and I wish I got their names, because each volunteer is due a huge thank you for looking after us like the weary travelers we were. They inquired after our health, replenished our supplies and sent us on our way with rousing cheers that I am sure startled the bear one of the 100km runners saw up on Auburn Lake Trails. Someone mentioned that we were in the top ten, which I quietly shelved at the back of my mind…never having been in such a position before.

For the next three miles, I tried to keep up with Sean Garbutt, who was running his first 50-miler. Four birds of prey were circling overhead as we reached the Highway 49 crossing, but we denied them an entrée. As we reached the single track on the other side, he looked at me asked “do you want to take it?”

“No, go ahead,” was my response. When we reached No Hands Bridge, Sean did not stop and began to blast up the final four-mile hill to the Overlook. An impressive finish. As for myself, I placed tenth out of thirty finishers in my tenth ultra. Some of those stars in the canopy over Stone’s Brew at the pre-dawn start had briefly aligned…

In all aspects, this was a brilliant event, lovingly assembled with care taken at each step. There were achingly steep sections of trail, but also very runnable sections of soft, shady trail where the voices of rafters enjoying a paddle echoed up canyon walls. There were blisters and there was nausea. But what jaunt in an ultra is without these companions?

There were also hot dusty stretches, but this just increased my gratitude for the kind volunteers at those oases we call aid stations without whom it would not be possible to undertake such an experience.

At the end, Mistina Sayani from Calgary expressed it in just the right way as she crossed the finish. “You people are all crazy to run in this heat,” she shouted while flashing a big Canadian grin. Yes – crazy – but in a good way. 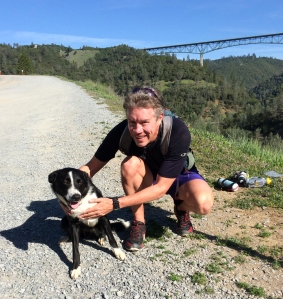 With Roy (who personally knows Bob Halpenny) near Highway 49 on an earlier training run (photograph by Bob Halpenny).

With about a mile to go to the river, hence the smile, at mile 37 or so (photograph by Joe McCladdle).