I am struck by images from the recent Iranian election and thought I would make a comparison of election images from other countries in the region. My methodology lacks scientific rigor, would be laughed out of any legitimate study, plus I’ll admit that I’ve stacked the deck somewhat. Nevertheless, to my eye, one country appears to lean more to the west than the others. And although images can be highly manipulative, they are often revealing.

Here is the test. Pick the images which correspond to the following countries: Iran, Afghanistan, Israel, and Saudi Arabia. The inclusion of the Saudis is a slight deception, since the country is a monarchy, but they do sometimes have municipal elections. My contention is that you can see it in the eyes of the women, and although the plague of the ubiquitous cell phone is also evident, in Iran you see young people who look as though they would gladly cast off the theocracy and embrace freedom, if only given the chance. 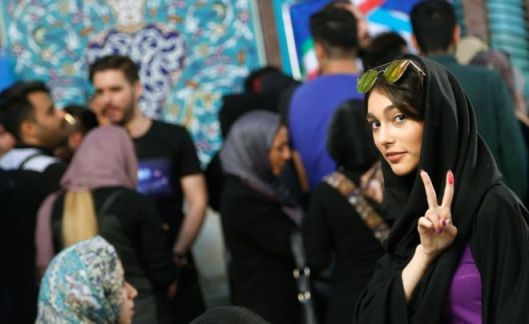 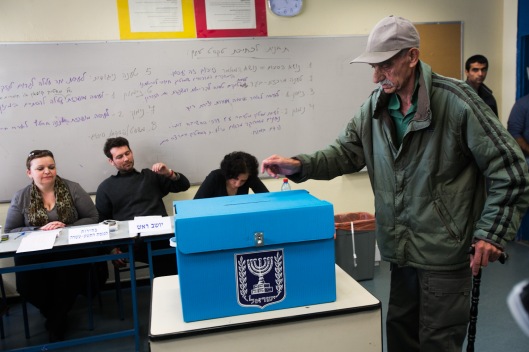 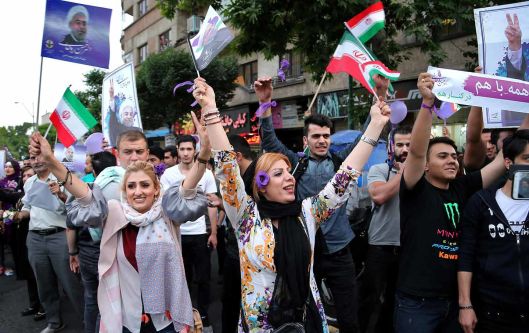 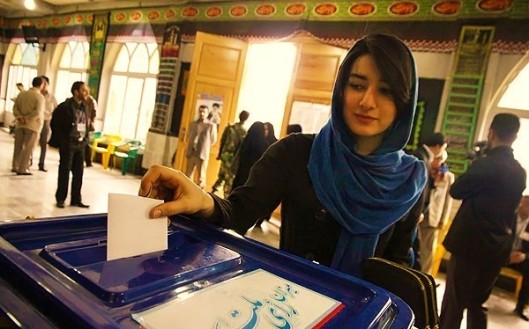 The point I really wish to make is that the United States is yet again backing the wrong regime. Our relationship with the Saudis is a Cold War relic that will ultimately drag us into a much wider and devastating war.

I have no doubt you can find images to stack the deck your own way, creating a different impression – particularly if you go back to the 1979 Iranian Revolution. Yet consider how the United States has historically treated Iran, and you begin to see where that chip on their shoulder comes from.

It was in 1953 that the CIA backed a coup which overthrew the Iranian government. Kermit Roosevelt, grandson of Teddy and distant cousin of FDR, was the CIA’s man in Tehran. By now, you should realize that the United States merely follows the footsteps of the British throughout the entire region – treading over the same mistake strewn ground. The British staged their own Iranian coup in 1921. Then later, the U.S. backed Saddam Hussein in the Iran-Iraq war of 1980-1988, and may have even supplied some of the chemical weapons used by Iraq.

But let’s get back to Saudi Arabia. This is the home of the Wahhabi ideology whose followers attacked the United States on September 11, 2001 (although for a different interpretation, see this New York Times article). This sect of Islam was founded by Abdul Wahhab (1703-1792), who with Muhammad bin Saud established the first Saudi state in 1744. My argument is that Western Europe and the United States weaponized the Wahhabi ideology in a misguided attempt to thwart Russian ambitions. It begins some time ago, as you no-doubt guessed, with the British.

The British were in Afghanistan to protect their position in India, which officially began in 1600 when Queen Elizabeth I granted a charter to the Honourable East India Company. The French also thought that India could be good for trade (opium, silk, cotton, tea, and so on) and formed a rival French East India Company. France and Britain fought each other for awhile on the subcontinent and elsewhere in the world including a little tiff in North America where a bothersome British colony had the cheek to declare independence. It was Clive of India who put paid to French ambitions in India in 1757 at the Battle of Plassey, and the French who returned the favor in North America by helping the colonists. Despite their North American losses, the British remained untouchable at sea, but were vulnerable by land. It was thought that Russia posed the next and greatest threat. Hence the British interest in Afghanistan and the resulting First Afghan War (1839 to 1842).

Almost since its inception at the beginning of the 7th century, Islam has been under siege from the West. Although to be fair, there was a time when Islam gave as good as it got. The Umayyad Caliphate expanded into the Iberian Peninsula in 711. Later, Constantinople fell to the Ottoman Empire in 1453. But in the nineteenth century, the Ottoman’s become the Sick Man of Europe leading into the First World War. Then Germany had an idea.

The First World War quickly bogged down in Flanders Fields, and powers on all sides tried to come up with alternative plans to break the stalemate. Churchill came up with Gallipoli. The Germans thought it would be a good idea to arm Irish nationalists. But it was the other German idea that was right out of the Great Game. The Germans realized that Britain could be destabilized by threatening their empire on the subcontinent. To this end, the Germans were in Kabul in 1915 with plans to start a holy war. Islam would be used as a weapon against the British.

Although the German idea didn’t work (they did loose the war), the United States thought it could use yet another failed European strategy to fight the Soviet Union during the Cold War. Communism does not abide religion. It is anathema to Communists. So the United States encouraged Saudi Arabia to spread its Wahhabist interpretation of Islam to fight the godless Communists. What else to do with all that oil money? It was a nice fit at the time, but would ultimately be bad for the United States.

In 1979, the Soviet Union invaded Afghanistan. The U.S. responded with covert operations against the Soviets (code named Operation Cyclone) in which the United States fought a proxy war by arming and supporting the Mujahideen (the word meaning “those engaged in Jihad”). Out of the Mujahideen grew the Taliban which was created by the Pakistani intelligence agency and funded by the United States. There was even a time when the United States felt it could do business with the Taliban. Union Oil Company of California was involved in negotiations with them to build an oil pipeline through Afghanistan. But the 1998 bombing of the US embassy in Nairobi made it difficult for the United States to continue its support of Jihadists. And after 2001, well…

The West’s habit of stirring up trouble along Russia’s southern flank by enlisting the help of fundamentalist Islam has to be the most short-sighted and disastrous foreign policy in history. The strategy was deeply flawed and left the region from the Mediterranean to Pakistan awash in continual strife, cost trillions of dollars and millions of lives, and has begotten the worst humanitarian crisis since the end of the Second World War.

Alexander the Great lead his army through the Khyber Pass in 326 BCE in his failed attempt to capture India, becoming the first head-stone in this “Graveyard of Empires” known as Afghanistan. With over two-thousand years of examples, war proves that it is always an abysmal failure that only succeeds in setting up the next monstrous regime. Clearly, war as a strategy has failed to sort-out the region. Isn’t it time for a new approach?

The United States should drop its so-called ally, Saudi Arabia. ISIS-like, the Saudis continue to behead and stone to-death those who incur its disfavor or disagree with the regime. The Saudis are guilty of war crimes which, most notably in Yemen, are aided by the United States government. This includes the use of cluster munitions which are banned under the 2008 Convention on Cluster Munitions and the use of white phosphorus on populated areas. The U.S. State Department has this to say about the Convention on Cluster Munitions – “Cluster munitions have demonstrated military utility. Their elimination from U.S. stockpiles would put the lives of its soldiers and those of its coalition partners at risk.” The lives of innocent civilians apparently do not figure into the State Department’s reasoning. Other countries that are not signatories to this Convention include: Saudi Arabia, Libya, Russia, North Korea, Iran and Yemen (other U.S. allies in the region also commit war crimes, see Israel’s use of white phosphorus in Gaza). Nice company. The most recent $100 billion dollar arms deal with Saudi Arabia is abhorrent. It will guarantee that the Saudis can continue to fan the parched flames of conflict in the Middle East for decades.

The second part of this new approach dictates that the United States embrace young Iranians who can truly become a moderating force throughout the region, once the shackles of theocracy are broken. Look at those pictures again at the beginning of this blog and see if there is a shift in your perspective.

Lastly, but no less important, a radical idea presents itself in Syria – or really next door in Lebanon. In Lebanon alone, there are upwards of one-million Syrian refugees, of which 200,000 are children in need of education. Do we teach them that the West is uncaring of their humanitarian plight, ignorant of their culture, and closed to asylum (visit any homeless camp along the urban river banks of American cities to get a sense of what life in a refugee camp is like – minus the water)? Or do we radicalize these children by providing an education? A foreigner looks at the United States and sees a country that incongruously loves its guns and bombs more than its children. Now is the time to change that perception and begin the long process of reconciliation.

The Clooney Foundation for Justice is taking the first important step in this direction, believing that “without education, this lost generation becomes not only a missed opportunity for the advancement of Lebanon but also a huge security threat in the region and beyond.” The Foundation plans to work with private sector partners to design “a program to provide out-of-school children in Lebanon, including Syrian refugees, a chance to go back to school.”

Take up the White Man’s burden—
The savage wars of peace—
Fill full the mouth of Famine
And bid the sickness cease;
And when your goal is nearest
The end for others sought,
Watch Sloth and heathen Folly
Bring all your hope to nought.

2 thoughts on “Iran – Radicalism in the Age of Radicalization”